Parga is a beautiful holiday destination in Epirus, also known as the "Bride of the Ionian" because of its unparalleled beauty. It is located in the northern part of the prefecture of Preveza. The picturesque town is built amphitheatrically under the Venetian Castle. It is considered one of the most cosmopolitan holiday destinations. It has approximately 3,000 permanent inhabitants, while in the summer this number greatly increases due to its many visitors. The narrow streets, the traditional buildings, the neighbourhoods, the castle and even the traditional tavernas give a special ambience with an island feel to Parga. The castle of Parga can be reached via the narrow streets and steps from the port and there is a cobbled stone road which leads to the beach of "Xrysoyiali" of Valtou. 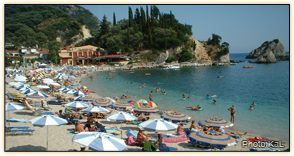 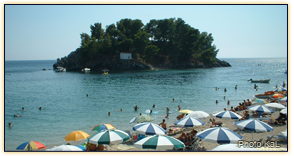 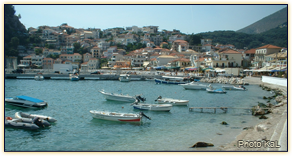 Parga was known in ancient times as Parayeiros, Parayaia and Ymaryos from which its present name is derived. It was occupied by the Normans, who built the first fort in the 14th century and was later occupied by the Venetians, the French, the British and the Turks. With the Venetian occupation came stability, great economic growth, with Parga acting as a bridge between Turkish-occupied Greece and Venice.

Parga’s history goes back to antiquity and includes many struggles for freedom. During the Venetian occupation, Parga was fortified and became a commercial centre (at Valto, "Xrysoyiali", the Custom house (Doyana) of the time can still be found). The town was accorded many privileges including its own government and thrived economically. During this period, the Venetians ordered the planting of olive groves and as a result a significant number of Pargans are involved in the production of olives and olive oil to this day!

Thomas Metland, the British governor in the area following the liberation of Corfu in 1814, looking for the support of Ali Pasa in efforts to undermine the Russian influence in the area, decided to sell Parga to him. Ali Pasa had been trying unsuccessfully for years to conquer Parga. In the past the Ottoman lord had even built a castle at Anthousa on a ridge above Parga to try and control the city. His efforts finally bore fruit with the English.

Even this complete upheaval did not discourage the Pargans and the Souliotes who continued to offer their services to the Greek revolution. Amongst them were Markos Botsaris and Kitsos Tzavelas, who became Greek heroes.

In 1913, Parga is incorporated into the Greek state. The Pargans return home after its liberation on the 23rd of February, 1913.

Our family is always willing to give information concerning excursions and trips or even reserve an excursion with the very well organized tourist offices of Parga! We can also help with car or motor bike rental. 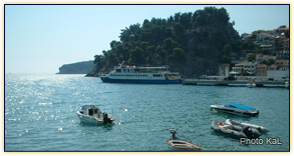 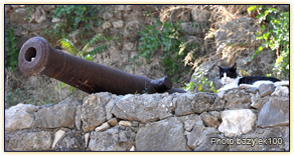 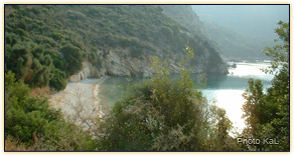 Beaches
In the area of Parga there are many different beaches and bays. In the old days its ports and shelters for naval vessels helped to make Parga into a former commercial centre. Today they contribute to the development of the city and the surrounding area as a tourist destination. "To Xrysoyiali": a large well-organised beach, with tavernas, cafes, sun beds and sea sports. From the centre of the beach little boats (like taxis!) depart until well into the night, to and from the centre of Parga. The beach faces the back of the castle and the houses of the most picturesque area in Parga called Tourkopazaro. On the opposite side of the bay is located the beautiful "Monastery of Vlaherna". To the right there is the small picturesque port.

CENTRE OF PARGA
Within the city of Parga you will find the beach of "Krioneri". A lovely, picturesque and well-organized beach facing the island of the Virgin. Opposite the centre of the beach is a small high rocky islet which is named Skorda. Just to the east of this islet is a small beach called Piso Krioneri, within the settlement of Parga and surrounded by high cliffs.

LICHNOS
5km (3,1 miles) east of the city is Lichnos beach which also has two small sea caves. The beach offers many amenities and water sports.

AI YIANNAKIS
About 7 km (4,4 miles) east of Parga next to the village of Agia Kyriaki is Ai. Yiannakis. One of the most beautiful small beaches in the area.

SARAKINIKO
Finally, 6km (3 3/4 miles) west of Parga, near Aghia village, is Sarakiniko beach. A beach which takes you back in time with its simple tavernas and surrounding natural beauty. All the beaches mentioned above are accessible by road. There are also a number of beaches which are accessible by sea, such as Agios Sostis, Spartila, Poyonia, etc.

For ferry schedules and reservations, you may visit www.greekferries.gr

Each time you make a reservation through this website, your reservation is made directly with the hotel. As such, you are guaranteed the lowest possible rate, unlike reservations made through third party systems (whose prices include the given platform’s commission). To send a reservation enquiry directly to Byzantio Hotel Apartments, click here!

Through our website, all of Byzantio Hotel Apartments’ rooms are made available.

What this means is that while on certain online platforms you may not find available rooms, by contacting Byzantio Hotel Apartments through our website, it is likely that you will find an available room.